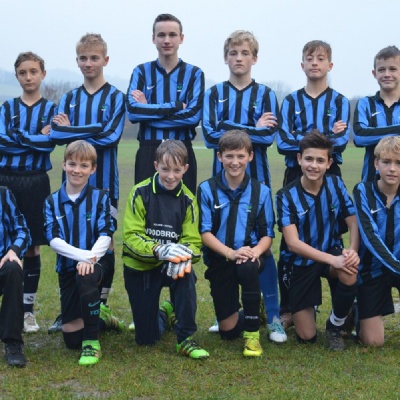 With the main football season on hold waiting for the year 8 County Cup Final, WBVS sent two teams to the North Charnwood Futsal Finals at Shepshed High School.  Up against Charnwood College, Shepshed High and Limehurst schools, WBVS sent two mixed year 7/8 teams, made up of the cream of the footballing talent we have in abundance.

WBVS 2 were up first against Charnwood and found themselves one nil down within 20 seconds after a lazy start.  Sam Crabtree took the game by the scruff of the net and led from the front. A piece of individual brilliance from Sam got the team on level terms. With short sharp games there was no time to wait and a winner duly came from Louis Abel who blasted home after good play from Luke Sweeney.

WBVS 1 started their campaign against Limehurst  with a very comfortable 4-0 victory. Goals from George Moore, AJ Korpal and an Ollie Burnett double secured the 3 points.  Limehurst were to finish 2nd overall which just shows the quality of this performance.

WBVS 2 then fought out a very tough draw with Shepshed having been under the cosh for the majority of the game before a late equaliser from Tommy Pattison.  A couple of fine saves from Kilian Cunningham and last ditch tackles from Declan Warren kept Shepshed at bay.

WBVS 1 played Charnwood in round 2 and produced their poorest performance in the tournament. Another lazy start saw Charnwood take an early lead before an onslaught from the boys saw Ollie Burnett calmly finish a flowing move. The boys just couldn't finish their chances and the game ended 1-1.

Round 3 and the dreaded playing ourselves!! WBVS 1 running out 3-0 winners with goals from George Moore, Aj Korpal and Ben Eames in a really entertaining game. WBVS 2 were very unlucky to find Daniel Warren in fine form in goal as he made a number of saves. A great advert for futsal as the quality on show was superb.

Round 4 and WBVS 1 knew that a win in their final game against Shepshed would secure the title.  A very tough game against a well drilled Shepshed side.  Chances came and went for both sides before a great dribble and Maradona from George Moore sent the ball through to Ben Eames to tap home the winner.   Not at their best all tournament, but did enough to get the job done and be crowned champions. Player of the tournament for WBVS 1 was Aaron Korpal who led by example and always put the team on the front foot.

WBVS 2 finished their campaign with a disappointing 3-1 defeat to Limehurst with another goal from Sam Crabtree. The year 7 trio of Eyal Butcher, Louis Abel and Tommy Pattison performed brilliantly and were assisted brilliantly by old hands Declan Warren, Luke Sweeney, Kilian Cunningham and Sam Crabtree to secure a respectable 3rd place finish.  Player of the tournament was Sam Crabtree for some superb skills and a real positive leader's attitude.