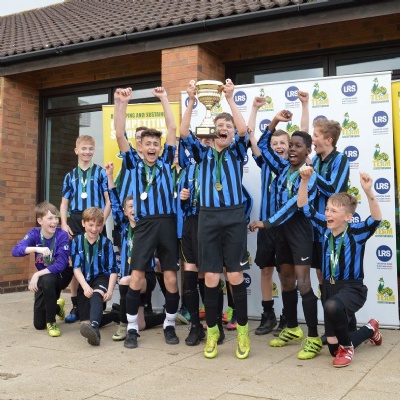 WBVS 3-0 Wigston Academy with goals from Sam Crabtree (2) and George Moore. Way back in September, the County Cup started for WBVS with a game against De Lisle and a 9-1 win. Who would ever have thought that 7 months later this would lead to the team being crowned the Champions of Leicestershire?

After a very average performance last week in our final warmup match against Market Bosworth, the boys were extremely relaxed and looking forward to the final. Up against the reigning champions; a team that had got to the quarter finals of the National Cup last season; that contained no less than 4 academy players; that had won every game again this season; WBVS were the bookie's underdogs. A very relaxed pre match buildup had the boys laughing and extremely relaxed on the bus. A traditional cup final walk around the pitch and light warmup got us to 10 minutes before the game and then the much anticipated Braveheart style manager's speech. The boys were reminded that this was their chance to make history; chance to walk the corridors like rockstars; chance to win Woodbrook's first ever football silverware; chance to be crowned the best in Leicestershire. This was their opportunity to achieve greatness!!

Whistle blown and the game started innocuously enough with no hint of the drama that would follow.

Honours even in the early exchanges as the two teams arm wrestled each other to try and gain control of the game. The midfield trio of George Moore, Ben Eames and AJ Korpal had got themselves a foothold in the ferocious centre midfield battlefield and the first quality through ball of the game sent Sam Crabtree through one on one with the keeper but a less than composed finish from the edge of the area saw the chance wasted. A quick shout to Sam to use the space in front and take the ball as close to goal as possible, good advice that he listened to!!! A couple of half chances for Ollie Burnett weren't taken and we should have been ahead but the score remained nil nil. Wigston were dangerous from set pieces and a couple of corners and free kicks produced quality balls into the danger zone but no chances created. Then a good tackle from George Moore and instant angled through ball sent Sam Crabtree through again with the keeper. Advice listened to and Sam drove with the ball positively towards the onrushing keeper, quality side foot finish and WBVS deservedly had the lead. Rapturous applause and wild celebrations ensued. Shouts of "Nil nil!!! Get your heads on it!!" rang around the pitch. This was the moment when I first became confident that we would win. The focus, professionalism and attitude of the boys was spot on and way beyond their years.

Half time arrived and the lead was secured. Buzzing, the players were absolutely flying. Then another motivational salvo fired at them. They knew what was required; clean sheet and the trophy was theirs. Sprinting back on the pitch, they boys exuded calmness and confidence. Game perfectly balanced for a frantic second half.

A brilliant start to the second half and this time AJ Korpal sprung the offside trap and sent Sam running through again. Identical run and finish that produced the identical result. Goal!! 2-0 and WBVS were on the way to the title. Then disaster struck and a tussle between Ollie Burnett and the opposition centre back saw WBVS awarded a freekick, only for a petulant kick out from Ollie to result in a red card. 30 minutes to go and down to 10 men. Could we snatch defeat from the jaws of victory?

Formation stayed the same, leaving Sam Crabtree on his own up front having to put in a double shift. Declan Warren, Sam Kerslake and Luke Sweeney, my trio of centre backs dug deep. They knew the ball was going to be put on them, the pressure was cranked up. Add in the full backs Josh Healy and Dan Petzing and this was a rearguard action of epic proportions. For 25 minutes the team defended like warriors. Backs against the wall. Header after header, tackle after tackle and clearance after clearance. We were solid and resolute. Compact and ferocious. Never giving an inch as we battled against the onslaught. We did manage to create a couple of half chances for Ben Eames and Sam Crabtree that we couldn't quite finish that would have taken the game away from Wigston once and for all. The game had become fractious and niggly with both sides picking up yellow cards. Fast and Furious isn't just a movie but a perfect description of this final.

Then with 3 minutes left on the clock a good pass from Ben Eames to George Moore on the edge of their box. George started to run, beat one, then another, then another and found himself on the left hand side of the box before firing a left footer back across the goalkeeper into the bottom corner of the net. 3-0 nil and scenes of relief and jubilation. 4 substitutions instantly as Jamie Mingle, Harlee Edwards, Alex Cheeseman and Will Mason all entered the fray. This season has been a squad effort and every single player has contributed throughout.

Final whistle and the celebrations began. After such a hard fought encounter it was great to see both teams congratulating each other and embracing afterwards. Just as it should be. The group were strangely subdued after the win due to sheer unadulterated exhaustion. Playing with 10 men for 30 minutes qualifies you for hero status.

Captain Declan Warren led the boys up to collect the trophy and signal the triumphant end to a mammoth 7 month footballing journey. This was a performance worthy of winning a World Cup final nevermind a County Cup final. No man of the match this time, but 15 men of the match. Outstanding all the way through.